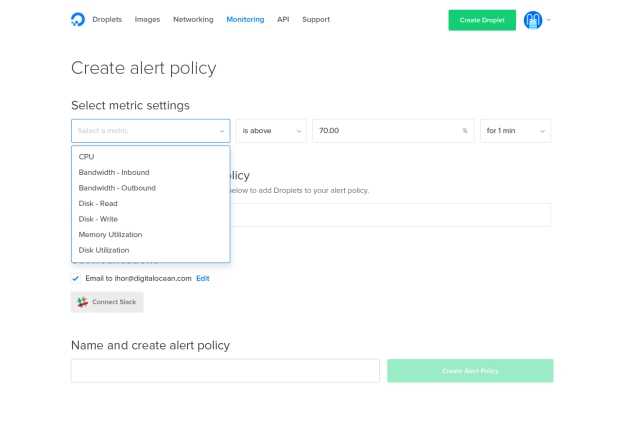 The user friendly monitoring interface enables resources without scripting skills to define and set parameters for monitoring each Droplet, thereby democratizing the ability of teams to monitor the operational health of Droplets. Moreover, the monitoring service absolves customers of the need to write custom code to monitor the health of their deployments by relying, instead, on an intuitive platform that accelerates the ability of customers to identify and troubleshoot performance issues. The release of DigitalOcean’s monitoring service follows-up on the company’s release of load balancing functionality in February and marks yet another significant step in DigitalOcean’s transformation from an IaaS platform geared primarily toward developers and startups, to one that can accommodate the needs of larger applications, workloads and organizations. Given that 2017 already features the release of load balancing and monitoring for its IaaS platform, existing and prospective customers can look forward to further enhancements from DigitalOcean that strengthen its ability to cater to a more diverse set of customers and application workloads by means of enhanced analytic and operational functionality.

We’re quickly expanding the capabilities of our cloud to support larger scale-out applications. With Load Balancers, we are providing developers and businesses with a simple service for maximizing the availability and reliability of applications without disrupting the end user experience. Load Balancers is the first major new product DigitalOcean has released this year. Over the coming year, you’ll see us continue to release a number of important products and features to meet our customers’ high availability, data storage, security, and networking needs.

Here, Austin comments on how the availability of load balancers on the DigitalOcean platform promises to improve application uptime and reliability while delivering minimal disruptions to the end user experience. The introduction of load balancing to the DigitalOcean platform empowers developers to horizontally scale traffic to healthy droplets to ensure high availability for its applications. By making load balancers available on its cloud platform, Digital Ocean reveals an interest in rendering its cloud platform amenable to applications of a larger scale than those that have been featured on its IaaS platform to date. As Austin notes, for example, the company plans to release a multitude of products that address the evolution of the needs of its customers. All this suggests that, with nearly one million registered users and 40,000 teams actively using its platform since its cloud was launched five years ago, DigitalOcean is ready to expand its portfolio of products to satisfy the needs of increasingly large, complex and data intensive applications that may have additional storage, networking and data security requirements. As such, the release of load balancers on the DigitalOcean platform inaugurates a new phase in the company’s trajectory that underscores the success of its global reception and subsequent need to support increasingly complex and large-scale applications while nevertheless preserving the simplicity that constitutes a key component of its branding and product differentiation in the IaaS space.

DigitalOcean today announces Hatch, a global online incubator that intends to help startups scale their operations and develop their products. Hatch provides startups with $100,000 in access credits toward the DigitalOcean cloud for a year in addition to training, mentorship and a community of other founders, advisors and investors. Currently in Beta, Hatch will work with 100 startups in the first 30 days of its launch while it enriches the set of offerings available to members of its incubator program and refines its process for onboarding other startups. Hatch aims to help startups decrease their expenses and subsequently empower them to focus on developing and selling their products. DigitalOcean’s online incubator Hatch reflects its history as a member of the TechStars accelerator program and its larger commitment to ensuring that startups focus on running their business instead of managing IT infrastructure as an IaaS platform geared toward the needs of developers and startups.

This week, DigitalOcean announced the finalization of $130M in credit facility funding for its IaaS platform that targets developers and startups. The company will use the financing to fund its explosive growth, global expansion and product development. KeyBanc Capital Markets Inc. led the financing in collaboration with Barclays Bank PLC, Pacific Western Bank, East West Bank, Opus Bank, Webster Bank and HSBC Bank USA. The $130M in credit facility adds to DigitalOcean’s $83M in Series B funding from June 2015 and positions it strongly to scale in response to customer demand as well design and deploy new product innovations. The huge advantage of credit facility funding is that DigitalOcean need not give away equity as a result of the funding raise. The $130M in financing illustrates DigitalOcean’s attractiveness to developers and correspondingly illustrates the multi-dimensionality of the market for IaaS services, which clearly contains a layer different from the battle for enterprise market share that features the likes of Amazon Web Services, Microsoft, Google Cloud Platform and Rackspace.

On July 8, DigitalOcean announced the finalization of $83M in Series B funding led by Access Industries, with additional participation from Andreessen Horowitz, the leader of DigitalOcean’s Series A funding round. The funding will be used to accelerate product development and build out the company’s team. Since its inception in 2012, more than 500,000 developers have deployed over 6 million droplets of DigitalOcean server capacity in various sizes. The company boasts the capability to provision a server in less than 55 seconds on a SSD hard drive by means of a highly intuitive user interface that streamlines provisioning and deployment. Today’s capital raise brings the total funding raised by DigitalOcean to $123.4M and underscores the success of the company’s mission to streamline and simplify infrastructure deployment for developers. In a blog post, the company noted that it intends to work on bringing the simplicity of provisioning infrastructure to deploying and managing production-grade environments in a sign that DigitalOcean intends to expand and enrich its product offerings while continuing to scale to accommodate its explosive growth.

DigitalOcean recently announced a partnership with Mesosphere that will bring Apache Mesos technology to DigitalOcean’s SSD cloud servers. Mesosphere, a San Francisco-based startup, commercializes Apache Mesos technology that enables organizations to manage datacenters as if they are one unit instead of an ecosystem of disparate infrastructure and networking components. Apache Mesos leverages a distributed systems kernel that allows developers to abstract CPU, memory, storage and other compute resources into a single pool that delivers improvements in fault tolerance, scalability, performance and operational simplicity. DigitalOcean customers can now launch Mesosphere from a landing page that enables the provisioning of a Mesosphere cluster. As a result, developers can benefit from the economies of scale specific to Mesosphere technology and subsequently manage thousands of DigitalOcean droplets as if they belong to one entity. DigitalOcean customers interested in using Mesosphere technology can choose from either a development (four instances of 2GB droplets) option, a high availability option (12 instances of 2GB droplets) and a custom installation option. Moreover, the streamlined provisioning process allows customers to take advantage of Mesosphere to manage their virtual private server “droplets” in minutes without struggling through an arduous and complex installation process. The partnership between DigitalOcean and Mesosphere illustrates the increasing prevalence of Apache Mesos as a breakthrough technology for delivering the scalability and performance enjoyed by internet giants such as Facebook, Google and Yahoo to enterprise customers interested in a similar degree of operational simplicity and performance for their own IaaS infrastructures.