Platform9’s Managed Kubernetes service enhances its OpenStack-based private cloud offering by deepening its ability to productize open source technologies for both infrastructure and application development. Today’s introduction of Fission marks yet another feather in Platform9’s cap by augmenting customer abilities to write functions that operate directly on container-based applications. Importantly, the nexus between Platform9’s infrastructure play qua its OpenStack private cloud offering and its application development functionality as evinced by its Managed Kubernetes platform strongly positions Platform9 to embrace both infrastructure and development use cases. As such, the general availability of its Managed Kubernetes service marks a milestone in its evolution and consolidates its diversification beyond infrastructure, rendering it an attractive acquisition target for a larger vendor seeking to ingest its demonstrated ability to deliver open source technologies as a service.

Platform9 and SolidFire have partnered to integrate Platform9’s OpenStack as a Service with SolidFire’s all flash storage platform. The integration takes advantage of Platform9’s deployment of Platform9 Managed OpenStack Cinder integration, which uses OpenStack Cinder to allow customers to select a block storage option to support the storage needs of their OpenStack deployment. SolidFire represents the first storage partner for Platform9’s SaaS OpenStack solution that boasts compatibility with both KVM and VMware vSphere hypervisors. Notable about SolidFire is that it supports disparate workloads that differentially take advantage of deployments based on both the KVM and VMware vSphere hypervisor. As noted in a Platform9 blog post, Platform9 chose Cinder because it “exposes all the functionalities in its solutions through RESTful APIs,” thereby aligning with Platform9’s predilection for Open APIs, in addition to a scale-out architecture that can deliver high performance and availability for mission critical workloads. The integration between Platform9 and SolidFire features a streamlined user interface that allows users to deploy SolidFire’s all flash storage infrastructure as part of the point and click process of using Platform9’s SaaS interface to set up a fully managed OpenStack cloud as illustrated below:

Expect to hear more details about Platform9’s use of Cinder in conjunction with technical details of its partnership with SolidFire in coming months.

Platform9 recently announced the release of Platform9 Managed OpenStack for VMware vSphere as a SaaS solution. Platform9 Managed OpenStack for VMware vSphere facilitates the deployment of OpenStack private clouds that leverage VMware vSphere virtualization technology. By using a virtual appliance to integrate OpenStack with vSphere resources, VMware enterprise customers now have the ability to spin up an OpenStack-based cloud that integrates with VMware vSphere resources. Developers interested in self-provisioning resources or accessing their applications will interface directly with the OpenStack cloud, whereas IT and Sys Admins will work on vSphere infrastructure resources. The Platform9 solution empowers developers to build automation into their workflows and applications in addition to using orchestration tools and APIs to construct relationships between workflows. Most importantly, however, the solution boasts 100% interoperability between VMware vSphere and OpenStack and supports vSphere-based API automation and compatible third party products. Overall, Platform9’s support of VMware vSphere represents an important milestone in OpenStack’s trajectory, particularly given the way in which the acquisition of OpenStack startups such as Cloudscaling, Metacloud and Piston Cloud Computing by the likes of EMC and Cisco threatens to slow the pace of innovation within the OpenStack space. Platform9’s ability to deliver OpenStack via a SaaS interface and give customers an unprecedented degree of flexibility regarding the configuration of their deployments. Expect the industry to deepen the integration between VMware and cloud-based environments as more and more cloud platforms come to terms with the reality that enterprises based on VMware vSphere prefer to maintain their fleet of virtualization infrastructure resources while they expand their investments in private and public cloud deployments.

Platform9, a Sunnyvale, CA-based company that helps organizations develop private clouds in minutes, emerged from stealth today. The company also announced the finalization of $4.5M in Series A funding from Redpoint Ventures. Platform9 delivers a SaaS platform that empowers users to spin up OpenStack-based infrastructures for purposes such as development, testing and production-grade application deployment. Customers can use Platform9’s SaaS interface to install an agent onto the servers selected for inclusion in the requisite private cloud environment. Platform9’s proprietary technology subsequently discovers and aggregates the designated infrastructure components to create a private cloud that can be accessed by users that have been granted requisite access privileges. Once the private cloud has been created, users can leverage dashboards such as the following to monitor their infrastructure: 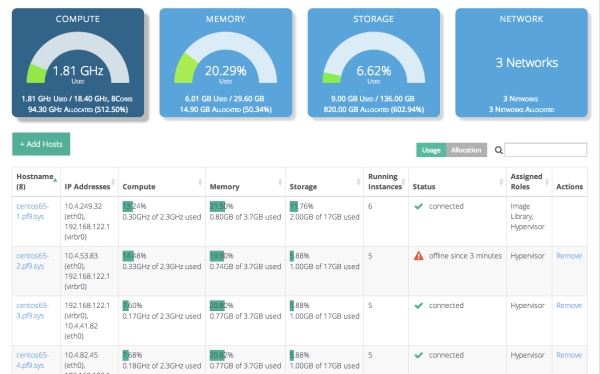 Platform9 aims to enhance customer agility by providing select teams with the opportunity to provision and create infrastructures at will. Importantly, the platform features a set of constraints on the ability of users to create private clouds that correspond to user roles and responsibilities within the organization. In all, Platform9 attempts to bring the radical simplicity of the Amazon Web Services deployment model to the private cloud space within the enterprise by way of a platform that supports Docker, KVM and VMware vSphere technologies and additionally boasts all of the benefits specific to OpenStack’s interoperability and rich set of APIs. Founded by a team of veterans from VMware, the company plans to release its technology from Beta into general availability by the end of the year. Platform9’s focus on streamlining the deployment and management of private clouds amongst enterprise customers aims at a sweet spot within the cloud space that is likely to grow as organizations continue to choose to begin with private clouds before graduating to public cloud deployments.