Today, Procter & Gamble announced a partnership with Verix, a Los Altos, California-based BI vendor that proposes to revolutionize business intelligence by focusing its analytics on exceptions instead of replicating a model based on a steady stream of reports and dashboards. Verix calls these exceptions “hotspots” and notes that one of its core value propositions consists of its ability to customize its proprietary algorithms to reflect ehe specificity of a business landscape. Although Verix leverages a set of algorithms that are horizontally scalable across verticals, it boasts the ability to render its statistical analytics specific to the life sciences and consumer goods verticals by way of the subject matter expertise of its team. The company transforms customer data into its proprietary database format and then runs statistical analytics on that data both in batch processing mode and in scenarios where data is refreshed and updated in real-time. In the case of Procter & Gamble, Verix’s analytics offer owners of business units the ability to understand supply chain inconsistencies and patterns with a view to proactively resolving stocking and shipment-related issues before they arise.

Verix provides analytics to customers through a SaaS platform as illustrated by the screen below: 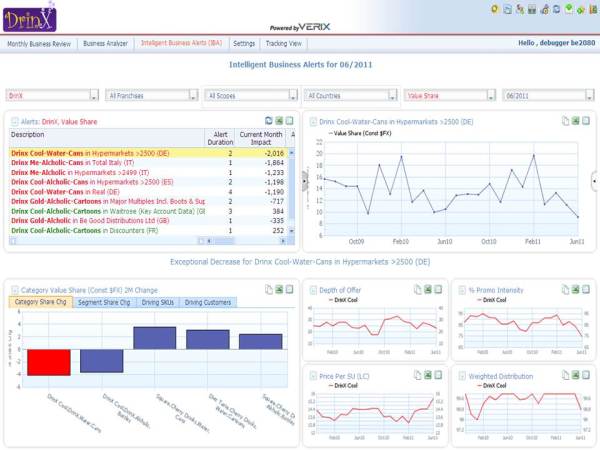