Apprenda has raised $24M in new funding in a capital raise led by Safeguard Scientifics with additional participation from New Enterprise Associates and Ignition Partners. Apprenda delivers a .NET and Java PaaS that distinguishes itself from other PaaS platforms by way of greater traction amongst enterprise customers that include the likes of JPMorgan, AmerisourceBergen and McKesson. The funding raise builds upon recent partnerships forged by Apprenda with Microsoft Azure, Piston Cloud Computing (recently acquired by Cisco) and the Cisco Intercloud Marketplace. The capital raise brings the total funding raised by Apprenda to $56M and is intended to enhance Apprenda’s product development and sales operations capabilities. The $24M Series D round also begs the question of whether the company is gearing up for an acquisition, particularly given its branding as an enterprise-grade PaaS that already boasts deep integrations with some of the leading IaaS platforms in the industry.

.NET and Java enterprise PaaS company Apprenda recently announced that it will be available in the Cisco Intercloud Marketplace. Slated for launch in the fall of 2015, the Cisco Intercloud Marketplace aggregates applications that run on Cisco’s Intercloud platform for building hybrid clouds. As part of the collaboration between Apprenda and Cisco, Apprenda will support Cisco SDKs and APIs. The partnership between Apprenda and Cisco underscores the co-implication between Platform as a Service vendors qua Apprenda and hybrid infrastructures such as Cisco’s intercloud, a “cloud of clouds” that facilitates the creation of hybrid, OpenStack-based clouds by delivering infrastructure and application development functionality. Apprenda’s forthcoming availability within the Cisco Intercloud Marketplace builds upon recent partnerships with Piston Cloud (recently acquired by Cisco) and Microsoft Azure in a clear sign that, with the exception of Pivotal Cloud Foundry, the days of a standalone PaaS platform may well be numbered as the industry churns out partnerships between application, database and infrastructure technologies such as the Basho Data Platform and Piston Cloud OS 4.0. The bottom line here is that PaaS is increasingly morphing into an appendage to IaaS-focused platforms albeit, a critical one by way of its ability to deliver a ready to use database and application stack that can be immediately consumed by developers.

Apprenda and Piston Cloud Computing have partnered to deliver a turnkey IaaS and PaaS that enables developers to create Java and .NET cloud-based applications. The integrated platform delivers “policy based access to OpenStack™ APIs” to enable Apprenda customers to expeditiously leverage OpenStack technologies. The partnership empowers Apprenda customers to take advantage of the simplicity of Piston’s platform for creating IaaS environments as the underlying infrastructure for their PaaS deployments. Conversely, Piston Customers can use Apprenda’s PaaS to create Java and .NET applications that reap the benefits of Apprenda’s enterprise-grade security and advanced functionality for the implementation of policies and procedures. Apprenda’s partnership with Piston builds upon a recent collaboration with Microsoft Azure that illustrates Apprenda’s strategy of teaming up with well known IaaS vendors as a means of gaining more market traction for its PaaS platform. Meanwhile, Piston customers may be surprised by its choice to partner with Apprenda given its close relationship with Cloud Foundry, but the collaboration clearly focuses on rendering Piston more available to Apprenda customers in contrast to prioritizing one PaaS platform over another. The partnership between Apprenda and Piston underscores the increasing co-implication of PaaS and IaaS within the cloud computing industry as PaaS players, in particular, attempt to seed their products on the infrastructures of IaaS vendors to enhance their market visibility and overall positioning.

Apprenda today announced a partnership with Microsoft whereby Apprenda customers will receive a license to take advantage of Microsoft Azure’s IaaS solution. Although Apprenda currently supports Azure’s Infrastructure as a Service offering, today’s announcement facilitates the creation of hybrid cloud infrastructures by encouraging Apprenda customers to consider Azure to power the infrastructure that undergirds its PaaS infrastructure. Because customers who purchase Apprenda now have access to a “fully configured Azure infrastructure footprint out-of-the-box at no additional cost” they can freely consider use cases for collaborations between private and public clouds that synergistically enhance the offerings of both infrastructures. As such, the collaboration between Apprenda and Microsoft delivers a turnkey hybrid cloud infrastructure that empowers enterprises to use the computational power and scalability of the Azure public cloud in conjunction with Apprenda’s support for application development, enterprise policies and procedures and enterprise-grade security and monitoring tools. Today’s announcement represents a win for Microsoft because its customers now have access to an enterprise-grade private Platform as a Service while conversely, Apprenda benefits from its positioning as a complement to one of the world’s leading public cloud infrastructures. Given the centrality of Azure to Microsoft CEO Satya Nadella’s “cloud-first” strategy for transforming Microsoft, the deal represents a particularly important partnership for Apprenda as it positions itself as a lynchpin for the creation of hybrid cloud infrastructures in contrast to a pure private PaaS player.

Apprenda today announced the release of version 5.0 of its enterprise PaaS platform for .NET and Java. Version 5.0 boasts expanded functionality for the implementation of enterprise policies, an upgraded developer portal and the deepest integration of .NET and Java in the PaaS industry today. Apprenda’s support for enterprise policies enables administrators to determine the types of access had by developers to different machines and development environments, or to create rules that constrain the degree to which development environments scale. For example, developers can leverage Apprenda 5.0’s support for enterprise policies to specify the minimum and maximum number of instances within a development environment to ensure that aberrant code does not inadvertently spawn a fleet of unnecessary virtual machines.

Apprenda 5.0’s management console allows developers to understand, at a glance, how their ecosystem is performing as illustrated by the graphic below: 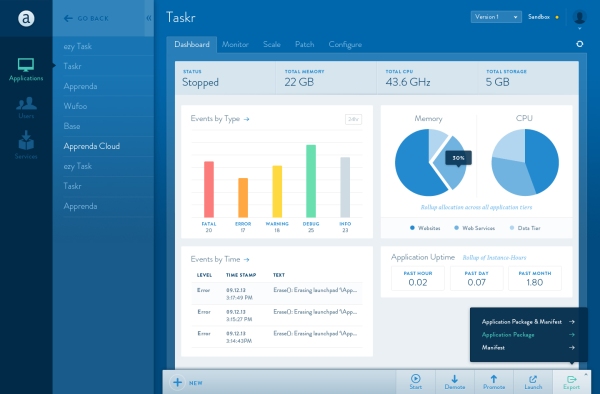 Developers can click on the red or orange bars in the top left quadrant to drill down on fatalities and errors and identify the instances and applications implicated in each category. Similarly, the top right quadrant illustrates the breakdown of Memory and CPU by application tier, whether it be websites, web services or the data tier. The visualization enabled by Apprenda 5.0’s enhanced developer portal represents part of the project of building “the most sophisticated, enterprise-grade PaaS on the market” according to Rakesh Malhotra, Apprenda’s VP of Products.

In an interview with Cloud Computing Today, Malhotra asserted the superiority of Apprenda’s Java and .NET functionality in comparison with competitors such as Cloud Foundry, Pivotal HD and Red Hat’s OpenShift PaaS by noting that Apprenda delivers the most integrated version of both .NET and Java, the two most widely used development frameworks in the industry. Apprenda’s integrated support of .NET renders it particularly attractive to Windows shops, an IT constituency that is apparently gaining momentum as evinced by the decision by Hortonworks to render its Hadoop 2.0 distribution compatible with Windows Server 2008 R2 and Windows Server 2012.

Overall, Apprenda 5.0 marks a significant step toward rendering Apprenda more attractive to enterprise customers that are intensely concerned with the policies and procedures that govern PaaS deployments. Moreover, Apprenda 5.0’s dynamic visualization technology for monitoring and controlling the performance of its private PaaS deployments dovetails effectively with its policies and procedures capabilities in order to ensure effective deployment parameters and swift remediation of irregular behavior within the PaaS infrastructure. Now that Apprenda has pivoted away from its previous monolingual commitment to .NET as opposed to its current support of .NET and Java, Apprenda 5.0 represents a clear and distinct attempt to consolidate its claim to be the only enterprise-grade PaaS in the industry today. Apprenda 5.0’s attention to streamlining the implementation of policies and procedures in conjunction with a dynamic developer portal illustrates a sustained effort to listen to and realize the needs of enterprise customers. The PaaS landscape should expect the emergence of even more enterprise-friendly functionality from Apprenda over the next year as it takes advantage of its recent funding raise to accelerate product development in tandem with a parallel expansion of its sales and marketing initiatives.

Apprenda today announced the finalization of $16 million in Series C funding in a round led by Safeguard Scientifics Inc. with additional participation from Ignition Partners and New Enterprise Associates. The funding will be used for sales and marketing initiatives as well as to continue the development of Apprenda’s platform as a service infrastructure. As a result of the investment, Philip D. Moyer, Managing Director of Safeguard Scientifics, will join Apprenda’s board of directors. Apprenda focuses on delivering a private PaaS platform that responds to enterprise needs for data security, privacy and dedicated hosting environments where hardware resources are not shared with those of other customers.

In an interview with Cloud Computing Today, Apprenda CEO Sinclair Shuller elaborated on Apprenda’s product differentiation within the Platform as a Service space as the only truly enterprise-grade platform as a service on the market today. Currently, Apprenda boasts an impressive roster of enterprise customers including the likes of AmerisourceBergen, Dell, Honeywell, JP Morgan Chase and Memorial Sloan Kettering. Thirteen of the top 20 financial institutions leverage Apprenda’s private PaaS solution and, according to Apprenda’s press release, JP Morgan boasts the world’s largest PaaS deployment with 300 applications hosted on the Apprenda platform.

Apprenda’s traction within the enterprise is indeed remarkable for a PaaS vendor. Platform as a Service has yet to achieve strong traction within the enterprise, although options are certainly proliferating as evinced by Red Hat’s OpenShift suite and Pivotal One’s Cloud Foundry distribution, to name two platforms amongst many. Apprenda’s additional round of funding positions the company strongly to build on its early traction within the enterprise and potentially catapult it to an undisputed leadership position within the enterprise PaaS space. Apprenda’s uptake amongst enterprise customers is all the more notable for its resistance to adopting a polyglot platform by focusing on support for .NET and Java for the time being. The next six months will be critical for Apprenda as it fights off the challenges of Pivotal One as it attempts to deepen its roster of enterprise customers while diversifying its portfolio to include SMBs as well. The PaaS market is still too embryonic to go through an M&A driven consolidation phase that whittles down the playing field to 3-5 vendors by the end of 2014. That said, the battle for private PaaS enterprise market share is on in full force and Apprenda leads the pack at present, flush with cash for the next phase of its expansion.