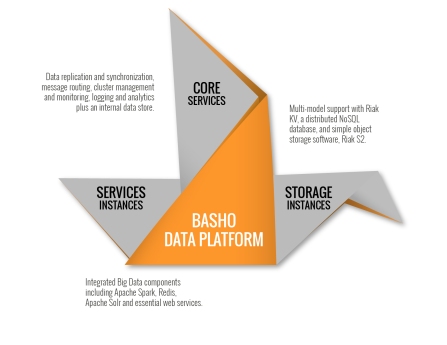 The Basho Data Platform responds to a need in the marketplace to complement high performance NoSQL databases such as Riak with analytics and caching technologies such as Apache Spark and Redis, respectively. The platform’s cluster management and orchestration functionality absolves customers of the need to use Apache Zookeeper for cluster synchronization and cluster management. By automating provisioning and orchestration and delivering Redis-based caching functionality in conjunction with Apache Spark, the platform empowers customers to create high performance applications capable of scaling to manage the operational needs of massive datasets. Today’s announcement marks the release of an integrated platform that stands poised to significantly augment the ease with which customers can build Riak-based Big Data applications. Notably, the platform’s ability to orchestrate and automate the interplay between its different components means that developers can focus on taking advantage of the functionality of Apache Spark and Redis alongside Riak KV and Riak S2 without becoming mired in the complexities of provisioning, cluster synchronization and cluster management. As such, the platform’s out of the box integration of its constituent components represents a watershed moment in the evolution of Riak KV and Riak S2 and the NoSQL space more generally as well.