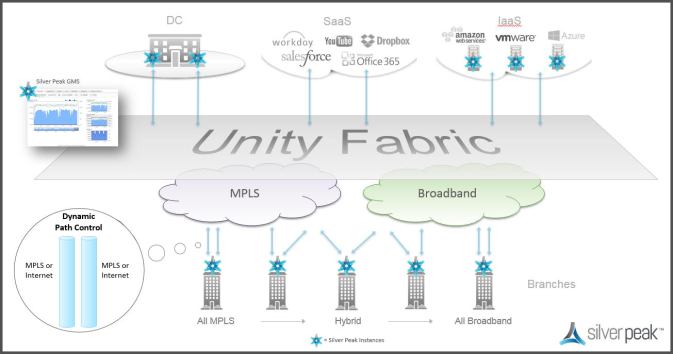 Because the SilverPeak Unity EdgeConnect SD WAN platform enables IT to monitor traffic across all applications and geographies, customers can obtain advanced analytics across the aggregation of all data centers and cloud interconnection centers. The SD WAN framework permits customers to understand whether problems specific to a SaaS or IaaS application are attributable to the network or another cause such as something indigenous to the application itself. In addition, the Unity EdgeConnect platform features dynamic path control that enables customers to define policies that dictate the re-routing of network traffic in conjunction with cloud intelligence that provides data on the optimal path for the performance of networks for SaaS applications. The SD WAN solution also features security-related features such as WAN hardening and Path Conditioning to ensure the securing of data as well as enhanced performance over the public internet. As told to Cloud Computing Today in a phone interview with Silver Peak CEO, David Hughes, cloud adoption constitutes one of the key drivers for Silver Peak’s SD WAN technology because enterprises are increasingly coming to terms with the realization that cloud infrastructures and their attendant applications are part of their network. Today’s release consolidates Silver Peak’s leadership in the WAN space by enhancing the intelligence of its broadband virtual network overlay solution and empowering customers to more effectively track traffic both within their corporate WAN and SaaS and IaaS deployments while reducing CAPEX and OPEX in the process.