Midokura today announced the latest release of Midonet, its software defined networking platform for IaaS infrastructures. MidoNet now integrates with OpenStack Grizzly and OpenStack Havana and supports Layer 2 Gateway networking. MidoNet’s support of Layer 2 Gateway means that customers can now “connect bare-metal servers to the overlay network” and thereby add physical networks to its network virtualization platform. The latest release also features an enhanced management console marked by the ability to understand how a virtualized network would operate if it had experienced a physical installation. In addition, today’s release boasts an enhanced command line in its web-based user interface. Midonet’s distributed, decentralized, software defined network virtualization platform represents an alternative to the Open vSwitch (OVS) Plugin provided by OpenStack. In an interview with Cloud Computing Today, Adam Johnson, General Manager of Midokura, notes that Midonet claims competitive advantages over OVS such as improved security, efficiency, scalability and performance as it strives to become the networking solution of choice for the OpenStack community.

The OpenStack community recently celebrated the release of OpenStack Havana, the eighth release of its open source Infrastructure as a Service platform. Orchestration and Metering represent the key components of the Havana release. OpenStack Orchestration enables the automation of compute, storage and networking resources by leveraging pre-configured templates. Meanwhile, OpenStack Metering provides administrators with a unified picture of data usage across the entire OpenStack platform including activities like “enterprise chargebacks and feeding systems monitoring tools.” This release includes Firewall-as-a-Service as well as SSL support for all service APIs. Havana also features support for Docker containers as part of OpenStack Compute, which enables users to spin up containers rather than virtual machines and thereby benefit from improvements in efficiency and performance. In total, OpenStack Havana contains 400 new features from 910 contributors, which represents a 70% increase in contributors as compared to the previous release, Grizzly. Interested users can learn more about Havana and the next release, Icehouse, at the upcoming OpenStack summit in Hong Kong from November 5-8.

The following overview of OpenStack Havana is provided courtesy of the OpenStack Foundation:

On July 19, OpenStack celebrated its third birthday in a year in which it consolidated traction within the enterprise, expanded its global member base and transformed from a compute and object storage platform to a compute, object storage, networking and shared services platform. OpenStack boasts well known customers such as Best Buy, Bloomberg, Comcast, Fidelity and PayPal and is supported by 231 companies, 10,149 members and 1,036 contributors of code. AT&T, Canonical, HP, IBM, Nebula, Rackspace, Red Hat and SUSE constitute Platinum members of the OpenStack Foundation while the list of Gold members has expanded to now include CCAT, Cisco, Cloudscaling, Dell, DreamHost, eNovance, Ericsson, Intel, Juniper Networks, Mirantis, Morphlabs, NEC, NetApp, Piston Cloud, VMware and Yahoo. OpenStack’s third year was marked by the Grizzly release, which featured support for the VMware ESX and Microsoft Hyper-V hypervisors in addition to expanded support for third party storage options and software-defined networking platforms. The next release, Havana, is expected to include the integration of orchestration and metering, and is slated for October 17, 2013. Ensuring inter-operability across OpenStack distributions (for example, Red Hat and IBM) as well as perhaps even with other cloud vendors, is expected to take center stage for OpenStack in year four.

The infographic below elaborates on OpenStack’s milestone accomplishments to date:

OpenStack Grizzly was launched on April 4, 2013 and contains over 230 new features that enhance the OpenStack platform’s computing power and ability to integrate with other technologies. The release was enabled by the collective work of 517 contributors who merged 7,620 software patches. More than 45 companies employed developers that contributed to the release including Red Hat, Rackspace, IBM, HP, Nebula, Intel, eNovance, Canonical, VMware, Cloudscaling, DreamHost and SINA. Given that OpenStack is used in production environments by the likes of Best Buy, Comcast, CERN, HP, NSA and Samsung, the Grizzly release focused on supporting the day to day operational work required to manage IaaS platforms based on OpenStack distributions.

Key features of Grizzly include the following:

The Grizzly release is a clear indication of the maturity of the OpenStack software development process, as contributors continue to produce a stable, scalable and feature-rich platform for building public, private and hybrid clouds. The community delivered another packed release on schedule, attracting contributions from some of the brightest technologists across virtualisation, storage, networking, security, and systems engineering. They are not only solving the complex problems of cloud, but driving the entire technology industry forward.

Here, Bryce notes how OpenStack Grizzly features important enhancements across a wide range of attributes such as virtualization, storage and networking. Central to these enhancements is a significant increase in OpenStack’s ability to integrate with other virtualization, storage and networking vendors in ways that dramatically enhance the attractiveness of the OpenStack product given the inherent heterogeneity of enterprise IT platforms. Expect subsequent releases to add more orchestration and automation to the OpenStack platform, most likely beginning with the Havana release in October 2013.

Piston Cloud Computing announces the release of version 2.0 of its enterprise OpenStack platform for managing Infrastructure as a Service (IaaS) private clouds today. Built on OpenStack Folsom, version 2.0 features an array of new features and functionality that streamlines the process of deploying and managing IaaS clouds by leveraging DevOps-related tools and improved storage and memory functionality. Highlights of the release include the following:

Piston Cloud’s Moxie HA platform automates the application of system upgrades, the re-balancing of VMs, and the provisioning and configuration of new resources in collaboration with CloudBoot, an advanced system orchestration platform. As a result, system administrators can monitor and manage their infrastructure with such ease that the platform is analogous to “managing your servers like cattle – you number them, and when they get sick and you have to shoot them in the head, the herd can keep moving,” as described by CTO and co-founder Joshua McKenty.

The graphic below illustrates the centrality of the Moxie HA and CloudBoot orchestration platform to the platform’s architecture: 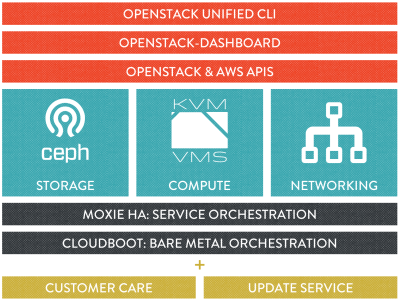 •Capability To Add Additional Virtual Machines In Less Than A Second

Overall, Piston Enterprise OpenStack version 2.0 is an unequivocally more robust product that provides an integrated, private cloud deployment and management experience over and beyond a simple OpenStack distribution. The release is compatible with all major software defined networking (SDN) platforms and additionally boasts complete interoperability with other OpenStack distributions and the ability to integrate with commodity hardware from x86 vendors such as IBM, Dell, Cisco, HP and Supermicro. One of the platform’s core differentiators consists of its integrated orchestration and configuration management technology that minimizes the degree of day to day operational oversight of the private cloud, IaaS environment. Piston’s CEO Jim Morrisroe surmises the value of the platform by noting:

Piston Enterprise OpenStack 2.0 is perfect for enterprise DevOps teams and AWS customers that want to reduce operating costs and dependencies with a private cloud solution, while maintaining the agility and scalable performance of a true cloud architecture.

In the wake of the release of OpenStack Grizzly and widespread backing of OpenStack for cloud platforms by the likes of IBM, Red Hat and even Oracle, Piston Enterprise OpenStack version 2.0 points to the emergence of a turnkey OpenStack solution for IaaS private clouds that brings all of the agility and scalability of public clouds to the enterprise’s doorstep. For the first time, the product also claims premium levels of customer support that attempt to allay concerns about the ability of a smaller vendor to nimbly respond to the needs of its customers.