The following represent Internet of Things Predictions from ParStream, the company behind the analytics platform built for the internet of things.

1. The Rise of the Chief-IoT-Officer: In the not too distant past, there was an emerging technology trend called “eBusiness”. Many CEO’s wanted to accelerate the adoption of eBusiness across various corporate functions, so they appointed a change leader often known as the “VP of eBusiness,” who partnered with functional leaders to help propagate and integrate eBusiness processes and technologies within legacy operations. IoT represents a similar transformational opportunity. As CEO’s start examining the implications of IoT for their business strategy, there will be a push to drive change and move forward faster. A new leader, called the Chief IoT Officer, will emerge as an internal champion to help corporate functions identify the possibilities and accelerate adoption of IoT on a wider scale.

2. Analytics Will Be the #1 Priority for IoT Initiatives: 2014 was about sensors and devices. The initial objective of many IoT projects was about simply placing sensors on critical assets such as aircraft engines, cell phone towers, cargo containers, and more to start collecting data from real-time events. Early IoT pilots demonstrated the wealth of information made possible by sensors and connections. 2015 will be about value. The attention will quickly shift from simply “enabling IoT” to truly “generating benefits from IoT”. Timely analytics is key in gaining actionable insights from data, and hence, a prerequisite for realizing the full potential of IoT. To drive more business value from IoT, companies will analyze more real-time data and implement new, innovative ways of delivering analytics to the “edge” or source of data.

3. IoT Platform to IoT Platform Integration Will Drive Relevance: Forrester recently proclaimed “IoT software platforms will become the rage in 2015”. Indeed, many IoT software companies are thinking “platform” rather than just “modules” to help deliver something closer to a “whole offer” for customers. However, an IoT platform’s real value will be driven by its integration with other IoT platforms. The reality is that there is no single, end-to-end IoT platform, which can deliver device management, data aggregation, analytics, visualization, etc. for the breadth of potential IoT use-cases. Hence, the power and value proposition of an IoT platform will be driven by its connection and integration with other complementary IoT platforms.

4. Industrial/Enterprise IoT Will Take Center Stage in the Media Spotlight: Driven by well-publicized acquisitions (e.g. Google/Nest) and high-profile new products (e.g. Fitbit, Apple Watch, etc.), consumer IoT has received a disproportionate amount of media attention compared to industrial IoT. While consumer IoT will eventually be a huge market, the hype greatly outweighs the near-term reality with respect to adoption. However, the tide is turning and industrial IoT will take the spotlight in 2015 as the media starts to more frequently cover the massive opportunity and traction of enterprise IoT in driving efficiency and creating new business models (e.g. Harvard Business Review’s cover story on IoT in their November 2014 issue).

Today, ParStream reveals details of an analytics platform dedicated to the internet of things.
Featuring ParStream DB, a patented database designed to handle the storage of massive amounts of data and real-time analytics, the ParStream platform boasts sub-second query response times, the ability to analyze billions of rows of data and time series analytics that analyze incoming, real-time data feeds in conjunction with historical data. Moreover, ParStream’s Geo-Distributed analytics server enables data analytics and data visualization on distributed datasets in ways that accommodate the disparate data storage infrastructures of contemporary global IT organizations. ParStream’s bevy of analytic offerings sit atop the ParStream DB as illustrated below:

As the graphic illustrates, ParStream’s internet of things analytics platform delivers a diverse range of analytic engines that operate upon massive volumes of data resulting from appliances, wearable devices, automobiles and sensors. Moreover, the platform boasts data acquisition qua ETL/streaming technologies and data visualization technology that collectively delivers a turnkey solution for internet of things use cases. As told to Cloud Computing Today in an interview with ParStream’s CEO, Peter Jensen, the ParStream solution absolves customers of the necessity of cobbling together disparate technologies that often struggle to integrate with one another by delivering instead a holistic solution for internet of things analytics that has few counterparts in the industry to date. The conjunction of the platform’s database and advanced analytics technologies renders it especially well suited for the massive, high velocity datasets specific to the internet of things space, particularly given its real-time analytic functionality on streaming datasets and capability to change the direction of its analytics as data evolves. More generally, the platform illustrates the Big Data industry’s increasing preoccupation with real time analytics on massive, streaming datasets and the concomitant challenges associated with storing incoming data and the results of analytic operations on the data in question.

Glassbeam Inc today announces $2M in additional funding by means of a capital raise led by the VKRM group. Glassbeam also revealed details of a strategic partnership with Tableau whereby Tableau can integrate with SQL-compliant extracts from Glassbeam to enable customers to more effectively visualize machine data and discern trends by way of Tableau’s powerful visualization capabilities. In an interview with Cloud Computing Today, Glassbeam CEO Puneet Pandit noted that the company plans to deepen its strategic partnership with Tableau by delivering offerings from Tableau that are specific to Glassbeam, pending the finalization of further negotiations. Moreover, Kumar Malavalli, a well known Silicon Valley technology entrepreneur, will take over as the company’s Chief Strategy Officer.

Glassbeam’s cloud-based platform is designed to ingest, process and analyze massive amounts of machine data. The platform’s deployment model involves the creation of a customized SPL file that, when deployed in the cloud, facilitates the integration of machine data into the Glassbeam platform. Glassbeam’s differentiation with the machine data analytics space involves its focus on the internet of things and the subsequent business need to rapidly transform massive amounts of complex data into actionable business intelligence. Today’s funding raise brings the total capital raised by to $8.1M. Glassbeam’s capital raise affirms its traction in the machine data space as evinced by its signing of Dimension Data as a recent customer. Expect to hear more details from Glassbeam as it continues to sharpen its product differentiation for big data analytics related to the internet of things.

Database and MapReduce technologies are good at handling large volumes of data. But they are fundamentally batch-based, and struggle with enabling real-time decisions on a never-ending–and never fully complete–stream of data. Amazon Kinesis aims to fill this gap, removing many of the cost, effort and expertise barriers customers encounter with streaming data solutions, while providing the performance, durability and scale required for the largest, most advanced implementations.

Kinesis replicates data across Availability Zones within an AWS Region in order to ensure a high degree of availability. In addition, the product offers a managed service for dealing with incoming streams of real-time data that includes load balancing, failover, auto-scaling and orchestration. Moreover, customers can send incoming data to data stores such as Amazon S3, Amazon DynamoDB or Amazon Redshift either in its raw form, or filtered according to business rules in order to reduce the size of the data store. Overall, Kinesis represents a truly disruptive technology that promises to change the way applications respond to continuous, dynamic data feeds. Use cases for the product include applications that leverage meteorological data, military-related sensor-based data, data streams from the emerging internet of things such as automobiles and appliances, in addition to the typical use case of web-related data. Amazon Web Services continues to push the envelope with respect to technological innovation and proves, once again, that it is so much more than an infrastructure as a service vendor that rents commodity hardware for application development and storage. Google and Microsoft look archaic in comparison, and as such, Amazon Web Services continues to consolidate its position as the cloud-based technology platform of choice for application development and integration.

The SCALAR platform leverages open source Big Data technologies such as Cassandra and Solr to deliver actionable business intelligence derived from structured and unstructured data. Meanwhile, SCALAR’s parallel asynchronous engine allows the platform to scale horizontally to process massive amounts of machine data that are interpreted by way of its dynamic schema functionality and semantic technologies that enrich the platform’s ability to make connections between source data elements.

A key component of the Glassbeam SCALAR platform is Glassbeam Studio, a tool that allows developers to transform unstructured machine data into structured formats for the purpose of performing a deeper dive into incoming data. Glassbeam Studio positions developers to transform data into Glassbeam’s proprietary semiotic parsing language (SPL) for understanding machine data before it is digested by the Glassbeam SCALAR platform and transformed into visual analytics as illustrated below:

Glassbeam’s output consists of visually rich, business intelligence dashboards that enable customers to make proactive, strategic decisions by way of a dynamic, real-time dashboard that illustrates trends and key attributes of source data. Key features of the Glassbeam platform in relation to the larger landscape of machine data sources and modalities of deployment are as follows: 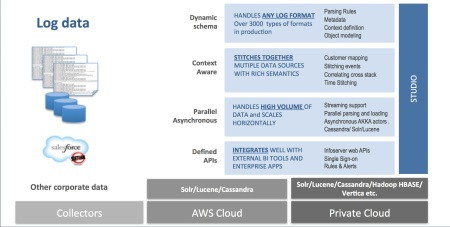 Given that the internet of things remains to be fully realized, the release of Glassbeam SCALAR represents a bold attempt to carve out an early niche in the space by focusing on business intelligence in relation to machine data. Nevertheless, the underlying technology platform impresses by way of the breadth of its functionality as exemplified by Glassbeam Explorer, the platform’s new search and discovery tool for understanding, analyzing and visualizing machine data. Expect Glassbeam to continue to innovate and differentiate itself from the rest of the machine data analytics space, even as it captures market share related to data center devices such as servers, routers and firewall technologies. In the meantime, the race is on with respect to who will capture the early foothold in the internet of things Big Data analytics space as the industrial internet matures and gradually renders itself more and more ubiquitous in the lives of enterprises and consumers alike. Pivotal One has already placed its bets in the Internet of Things analytics space thanks to a $105 million investment from GE, but the landscape still remains wide open.