Today, VMware announced the acquisition of Desktone, a Desktop as a Service vendor that specializes in desktop virtualization for Windows desktop environments and applications as a cloud-based service. Features of Desktone’s Desktop as a Service include a multi-tenant architecture whereby each customer receives their own discrete virtual environment, cloud-based self-provisioning and scalability across multiple geographies and IT environments. Desktone is certified to work with VMware’s virtualization ecosystem that includes the vSphere and vCloud fleet of products. Terms of the acquisition were not disclosed, though the deal does illustrate the depth of commercial interest in desktop virtualization given its cost, operational and security advantages for customers, in addition to its convergence with the industry’s larger migration toward cloud-based IT delivery.

Today, NComputing announces the release of its vSpace Server software that extends its desktop virtualization capabilities to Windows environments such as Windows Multipoint Server 2012, Windows Server 2012 and Windows 8. The latest release, vSpace Server 7.1, delivers enhanced graphics and a richer user experience for Windows users including expanded support for USB peripheral devices. vSpace Server 7.1 represents a key component of NComputing’s vSpace Virtualization Platform, a production-ready virtualization solution for medium sized companies that cannot afford desktop and application virtualization options from the likes of VMware and Citrix. Today’s release of vSpace Server 7.1 enhances NComputing’s vSpace Virtualization Platform and positions it to execute its strategy of building market share amongst small to medium sized businesses while concurrently targeting enterprise users through its partnership with Citrix and its N-Series thin client offering. 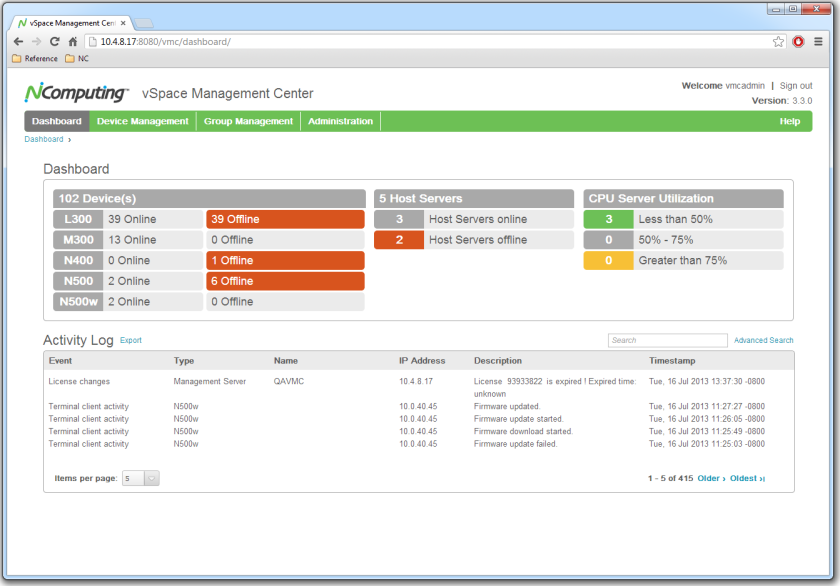 NComputing’s desktop and application virtualization platform is additionally complemented by customer support options that include the NComputing Support and Subscription (SnS) programs, whose purview now includes vSpace Server and vSpace Management Center. NComputing’s CEO, Raj Dhingra, remarked on the significance of the release of vSpace Server as follows:

The latest major release of the vSpace Server software demonstrates NComputing’s continued commitment to simple, powerful and affordable desktop virtualization for mid-size enterprises, small to medium businesses and key verticals. By offering support for the latest Windows environments, users can continue rely on NComputing technology to grow and adapt to their emerging business needs.

Dhingra’s remarks elaborate on the significance of the vSpace Server release in the context of the simplicity, power and value specific to NComputing’s virtualization options. By extending support to Windows machines, today’s release marks a notable enhancement of a virtualization solution that targets a segment of the market overlooked by solutions geared toward the enterprise. NComputing’s two pronged strategy of targeting non-enterprise customers via the vSpace Virtualization Platform while courting the enterprise vis-à-vis its partnership with Citrix positions NComputing to quickly consolidate its early traction within the small to medium-sized business market as well as within select verticals such as healthcare and education.

NComputing today announced the latest release of its thin client N-series featuring an array of enhancements that consolidates its position as a leader in the client virtualization space. The release builds upon NComputing’s relationship with Citrix to deliver a high performance, cost effective thin client solution that leverages Citrix XenDesktop and Citrix XenApp virtualization technology. NComputing claims that N-series firmware delivers competitive performance and quality at approximately one third the cost of comparable PCs and thin clients.

Key features of the latest release of the N-series thin client include the following:

•Certified integration of Imprivata’s OneSign single sign on (SSO) technology to streamline authentication amongst multiple devices in ways that are ideal for healthcare professionals that move from one room to another. The partnership with Imprivata also enables professionals to leverage RFID badges to seamlessly gain access to an ecosystem of machines without having to perform a single click.
•Additional USB options to support industry use cases such as specialized scanners, imagers, teller workstations in banking and other specialized peripheral devices.
•Integration with the Citrix receiver for Linux to optimize the user’s High Definition Experience (HDX) and utilization of multimedia audio and video streams.
•The latest version of vSpace Management Center in order to deliver management via a web-based management console including the capacity to perform and schedule critical updates to N-series firmware technology.

Raj Dhingra, CEO of NComputing, remarked on the value proposition of the latest release of the N-series as follows:

Together, NComputing and Citrix are transforming the economics of desktop virtualization. Since launching the N-series at last year’s Citrix Synergy show we’ve added more than 100 customers worldwide. The latest release is in direct response to the continued demand we’re seeing in every single market we serve, and keeps us well ahead of the competition. We will continue winning every time with our unique combination of simplicity, performance and value.

Dhingra’s remarks summarize NComputing’s strategy in the context of delivering simplified, high performing thin client solutions at a competitive price. NComputing’s customer base has expanded rapidly over the past year and now includes customers in healthcare, finance, education, manufacturing and government. Customers from all verticals leverage the benefits of the low power consumption specific to the N-series, whose System on Chip (SoC) technology consumes an average of 5 watts of power in contrast to the 150 watts of power typically consumed by a PC or laptop. The reduced power consumption specific to N-series firmware allows for less frequent recharging of thin clients in settings such as hospitals and manufacturing where the devices are typically moved from one space to another frequently, often in conditions where power outlets are not within immediate proximity.

Overall, the market outlook for thin clients remains positive with IDC projecting market growth of 6.2% in 2013 overall with higher growth rates expected for Europe, the Middle East, and Africa (EMEA) as noted by Oleg Sidorkin, senior research analyst at IDC:

Growth potential on the thin client market is still high in the EMEA region. We expect total thin client shipments in 2013 to grow fastest in France, Germany, and Russia – at more than 10%. This growth is driven by demand from healthcare entities, financial institutions, and public-sector customers, which are looking for a centralized desktop environment with high level of security and reliability. As the lifecycle of the current PC installed base among many companies is coming to an end, more organizations will consider thin clients as a viable alternative to desktop PCs in the coming years.

NComputing stands poised to increase market share in relation to competitors such as HP and Dell as its product line matures and traction in the enterprise space across multiple verticals deepens. According to IDC, NComputing currently has a market share of 16.1% in comparison to Dell’s (Wyse) 25.4% and HP’s 26.2% in the enterprise client device space. Given that thin clients typically do not perform well with HDX technology, NComputing’s latest N-series release could well disrupt the thin client market given its high performance with Citrix’s HDX technology and competitive cost and user experience simplicity.