Today, Concurrent elaborates on the release of Cascading 2.5, the open source framework for facilitating the development of applications on Apache Hadoop. Cascading 2.5 supports the recent released Hadoop 2.0 distribution including YARN and its other features. Cascading users that are interested in upgrading to Hadoop 2.0 can do so by means of Cascading 2.5. Similarly, applications that leverage the Scalding, Cascalog and PyCascading languages can migrate to Hadoop 2.0 as well by means of the Cascading 2.5 framework. The latest release of Cascading also features “complex join operations and optimizations to dynamically partition and store processed data more efficiently on HDFS,” according to the Concurrent’s press release. Finally, the release deepens its compatibility with other Hadoop distributions and Hadoop as a Service vendors such as Cloudera, Hortonworks, MapR, Intel, Altiscale, Qubole and Amazon EMR.

Cascading 2.5 represents one of the few products in either the commercial or open source ecosystem for simplifying the development of Hadoop applications while integrating with a rich and varied ecosystem of products as illustrated below: 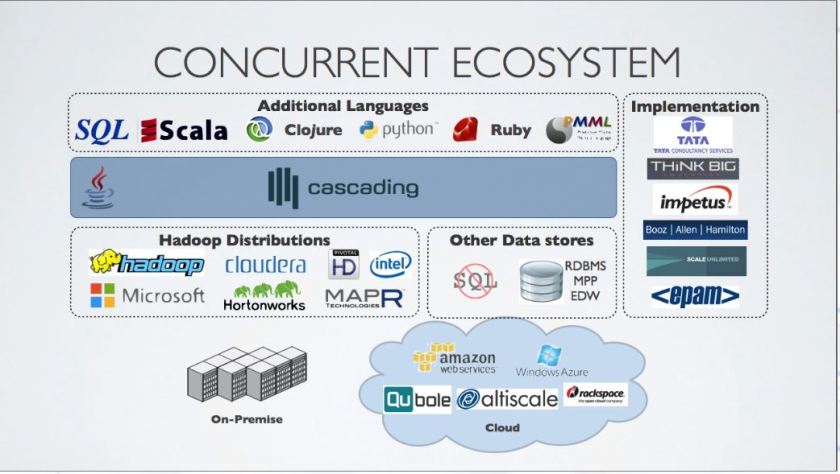 The graphic shows how Cascading 2.5 supports all major Hadoop distributions in addition to an impressive list of development languages, database platforms and cloud platforms. In an interview with Cloud Computing Today, Concurrent CEO Gary Nakamura and CTO Chris Wensel noted the uniqueness of Cascading in the Big Data landscape, particularly given its iterative refinement in collaboration with the likes of Twitter, eBay and The Climate Corporation over a period of more than five years.

Today’s announcement regarding the general availability of Cascading 2.5 is accompanied by news of the general availability of Lingual, an ANSI-compliant SQL interface that allows developers to use SQL commands to query data stored in Hadoop clusters. Unlike Apache’s Hive project, Lingual’s ANSI-standard SQL interface enables developers to deploy authentic SQL commands as opposed to HIVE’s SQL-like syntax. Cascading Lingual also allows for the migration of legacy SQL workloads onto Hadoop clusters, the export of Hadoop data onto BI tools such as Jaspersoft, Pentaho and Talend, and the ability to leverage the power of Cascading in conjunction with SQL to orchestrate the execution of multiple SQL queries instead of several, discrete disparate queries. The Big Data space should expect more from Concurrent as it continues to build out tools for simplifying application development on Hadoop, particularly as more and more Hadoop developers come to terms with Cascading’s advantages over MapReduce.